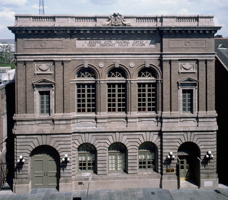 The Collection's holdings are available to the general public in the Williams Research Center (WRC). Through the assistance of the Center's experienced reading room staff, patrons have access to approximately 30,000 library items and more than 400,000 photographs, prints, drawings, and paintings, as well as to beautiful and unusual three-dimensional objects. Rare manuscripts and documents are available in the original and in microform.

Built in 1915 in the Beaux Arts style, the two-story brick structure housing the WRC is the work of Edgar A. Christy, architect, and builder James A. Petty; it was erected to house the Second City Criminal Court and the Third District Police Station. The Chartres Street building, purchased by the State of Louisiana in 1957, had been vacant for many years when The Collection bought the property in 1993.

During the colonial period, the land was owned by the Marigny de Mandeville family and, through the years, by other well-known Louisiana families—Delachaise, Forstall, Macarty, Destrehan, and Perrilliat. The present lot, once part of a larger property extending to the corner of Chartres and Conti Streets, was part of the succession of Celeste Robin de Longy, widow of Jean Noel Destrehan, in 1825. A long, low structure—described as a maison à étage—with a separate kitchen at the back of the property was demolished before the construction of the present-day building.

After an extensive restoration, the Chartres Street building opened as the Williams Research Center in January 1996. The center houses The Collection’s public reading room for researchers—in the former courtroom—as well as offices for curatorial, library, and manuscripts personnel; collection storage; and processing areas.

The reading room at the Williams Research Center is open from 9:30 a.m.–4:30 p.m., Tuesday–Saturday, excluding holidays. 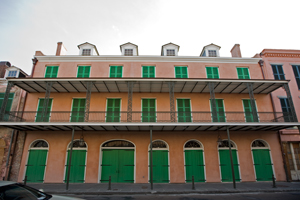 Opened in June 2007, the addition to the Williams Research Center was the first new construction completed in the French Quarter after Hurricane Katrina. The addition provided THNOC with increased exhibition and programming space as well as three floors of archival storage. On the first floor, the multipurpose room, named for Boyd Cruise, The Collection's first director, hosts programs and exhibitions.

New Orleans architect Davis Jahncke based his design for the addition on a drawing obtained from the New Orleans Notarial Archive. The illustration depicted a hotel, complete with a distinctive rosy-hued façade, that stood on the exact lot in the 1850s. In addition to following the design, Jahncke also implemented several 19th-century building techniques, such as hand-hammered hardware and a false carriageway and chimneys. The harmonious result demonstrates The Collection’s commitment to architectural preservation.

The new building is located at 535–37 Conti Street, but patrons enter the new structure through the Williams Research Center at 410 Chartres Street. As part of the WRC, the addition is open Tuesday through Saturday from 9:30 a.m. to 4:30 p.m. 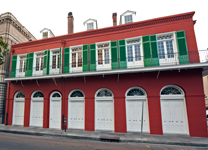 The Perrilliat House sits at the corner of Chartres and Conti Streets and functions as part of the Williams Research Center. Built in 1825 by François Marie Perrilliat, the three-story building is composed of four connected row houses, a central courtyard, and back buildings.

The property was recently renovated by Koch & Wilson, who brought the building back to its 1825 style as much as possible. They exposed the arched bays on the front façade, some of which had been boarded up. The exterior stucco was painted a dusty red hue to mimic the building’s original imported northern brick, and the shutters were restored to the “Paris green” shade that was popular in the 19th century. The renovation incorporated other period touches, such as wide-plank pine floors, an exposed-joists ceiling on the ground floor, and a beautifully restored entresol.

The Perrilliat House includes new gallery space named for donor and longtime friend of The Collection Laura Simon Nelson; new executive office space; the Destrehan Board Room, which is a generous gift of the Azby Fund; a spacious photography lab; and unified work space for cataloguers, curators, and other staff.